Azerbaijan and the U.S will continue taking action aimed at strengthening bilateral relations, former member of the U.S. House of Representatives Bill Richardson said at the U.S-Azerbaijani convention 'Vision for the Future' in Baku on Wednesday.

He said that Washington and Baku are establishing a good partnership in various fields.

"We welcome Azerbaijan's reforms in the economic and democratic spheres," Richardson said.

Moreover, he stressed that the U.S hopes for the peaceful settlement of the Nagorno-Karabakh conflict.

The US-Azerbaijani convention 'Vision for the Future' started in Baku on Wednesday.

The event is being attended by President of Azerbaijan Ilham Aliyev who delivered a speech.

As part of the convention, the following sessions on topics will be held:

The State of the US - Azerbaijan Strategic Partnership: US Foreign Policy toward Azerbaijan, Energy Security from the Caspian to Europe: the Changing World Energy Security Dynamics: New prospects for the Southern Energy Corridor, Azerbaijan between East and West, Eurasian Security and Cooperation: Azerbaijan's Role in Regional Peace and Stability.

Special sessions will also be held on the following topics: Shaping a Presidency, Electing a President: Insights from America's Premier Political Strategist, Women's Leadership Role in Governance, Turning Black Gold into Human Capital: Investing in Azerbaijan's Future, Azerbaijan at the Strategic Global Crossroads, The US and its partners - common views and values and The White House, the Nation and the World will be held within the Convention. 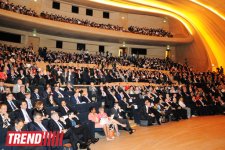