The embassy hosted a meeting with 20 members of the German Journalists Association.
During the meeting, the guests watched a film about the First European Games. They were informed about the preparation process for the Games and the development of Azerbaijan's sports infrastructure.

Azerbaijan's Ambassador to Germany Parviz Shahbazov talked about the history and the current status of relations between the two countries, their cooperation in various spheres, as well as the two working visits of Azerbaijani President Ilham Aliyev to Germany from early 2015. 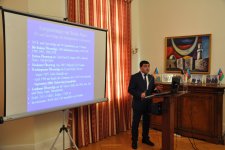