Baku 2015 : EUROGAMES Materials 27 June 2015 22:04 (UTC +04:00)
A round table dedicated to the First European Games was held at Baku 2015 European Games Operation Committee on June 27, in accordance with the appeals of foreign media outlets. A round table dedicated to the First European Games was held at Baku 2015 European Games Operation Committee on June 27, in accordance with the appeals of foreign media outlets, AzerTAg news agency reported.

During the round table, the Azerbaijani president's aide for public and political affairs, Ali Hasanov and the country's minister of youth and sports, the CEO of Baku 215 European Games Operation Committee Azad Rahimov answered the questions of foreign journalists.

Hasanov said that the mission of foreign journalists is to inform the world community and the communities of the countries they represent, about interesting moments of the European Games, and everything else they saw, heard and observed in Baku.

Hasanov expressed hope that foreign journalists will fully cover all the positive factors that help to promote the strengthening of relations and rapprochement of the Azerbaijani people with the other nations represented by foreign journalists.

Furthermore, Hasanov said that modern sports infrastructure created in Azerbaijan allows the country to hold the most important sports events, including the Olympic games.

Therefore, Azerbaijan's desire in this issue is same as that of the other major countries, Hasanov said.

He went on to add that a country's power is not estimated by the size of its territory or population, but by its social and economic potential and national will.

Hasanov underscored that Azerbaijan is a tolerant country and a country of sports.

"Azerbaijan is a country which has set the civil society norms," he said. "This allows Azerbaijan to host the most important and global sports events in the future."

Hasanov added that diversification of economy has been successfully carried out in Azerbaijan as a result of right strategy chosen by the country.

By setting the strategy of using the first oil revenues as the main task, Azerbaijan reduced the dependence on oil in a short time, said Hasanov, adding that this dependence will become even less in the future.

In turn, addressing the round table, minister Azad Rahimov for his part expressed gratitude to the representatives of the foreign media outlets for their attention to Azerbaijan and the first European Games.

Rahimov said that as a result of the work done by the President of Azerbaijan Ilham Aliyev and Chairperson of Baku 2015 First European Games Organizing Committee Mehriban Aliyeva, this prestigious sports event is being held at a high level.

This has been repeatedly emphasized by the representatives of the delegations, which have arrived in Azerbaijan as well, Rahimov said, adding that it shows that Azerbaijan has worthily coped with its tasks.

Rahimov added that culture of rooting of Azerbaijan's sports fans was also demonstrated during the Games.

Furthermore he said that the venues constructed for the Games will promote the development of sports in the country in the future.

The minister said that the sports facilities constructed and reconstructed for the First European Games in general, got the approval of the international sports structures.

Rahimov also said that some proposals have been put forward regarding holding a number of world and European competitions in Azerbaijan. 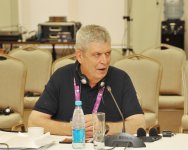