The ruling New Azerbaijan Party's Youth Association held an event titled, "Do Not Forget Khojaly," dedicated to the nineteenth anniversary of the Khojaly genocide.
A film about the Khojaly tragedy was screened.

The tragedy was a crime committed not only against the Azerbaijani people, but against all humanity, New Azerbaijan Party Deputy Chairman Ali Akhmedov said.

"Unfortunately, the world community has not properly assessed this tragedy. One of the cities of Azerbaijan was razed to the ground, more than 600 civilians were massacred, but the perpetrators of this crime are still free. They even have senior positions in the country, which is the aggressor," he said.

The executive secretary also noted that international agencies must give a fair assessment of this tragedy. "We want the perpetrators of this crime to be punished. They should be punished to prevent these crimes," he stressed. 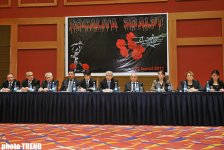