UN Security Council resolutions on Karabakh must be enforced: expert It is inevitable that there will be more innocent victims if the UN Security Council resolutions on the Nagorno-Karabakh conflict are not enforced, Ziba Norman, director of the UK Transatlantic & Caucasus Studies Institute, told Trend.

“There are numerous UN resolutions in place and they must be enforced,” she said, adding that how this can be done remains the most important issue.

“What remains to be answered is how these resolutions are to be enforced, otherwise it is inevitable that there will be more innocent victims.”

It begs the question of just how serious the stakeholders are about resolution of the Nagorno-Karabakh conflict in accordance with international law, Ziba Norman added. 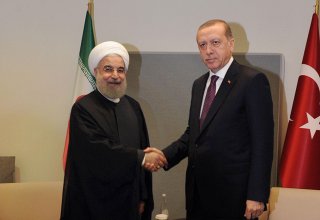 Any threats against Azerbaijan's territorial integrity must be averted, Erdogan tells Rouhani