Netherlands hopes that the Armenia-Azerbaijan Nagorno-Karabakh conflict will be resolved soon, former president of the Senate of the Kingdom of the Netherlands, former president of the Parliamentary Assembly of the Council of Europe (PACE), chairman of the Dutch Friends of Azerbaijan Group Rene van der Linden said in an exclusive interview with Trend.

He noted that the Netherlands follows the activities of the OSCE Minsk Group.

“Until now, it hasn’t brought a solution to this too longstanding conflict. There are a huge number of refugees in Azerbaijan [as a result of this conflict],” said Rene van der Linden.

He said that the Netherlands is looking forward to reopening of the negotiations in coming months to come to a solution.

Rene van der Linden pointed out that today, there are optimistic views regarding the settlement of the Nagorno-Karabakh conflict.

“I hope that this will create a positive climate so that Azerbaijan and Armenia can together with Minsk Group come to a solution,” he added. 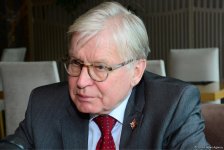