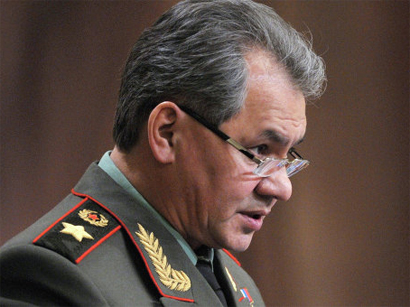 Poland and Ukraine refused permission for a plane carrying Russian Defence Minister Sergei Shoigu to use its airspace on Friday while returning home from a visit to Slovakia, the Slovak Interior Ministry said, Reuters reported.

The plane carrying Shoigu, who had attended a ceremony to commemorate the anniversary of an anti-Nazi uprising in the central Slovak city of Banska Bystrica earlier in the day, turned back and landed in the Slovak capital Bratislava.

An Interior Ministry spokesman said Shoigu remained on board his plane at the airport but was offered transit to the Russian embassy in Bratislava. Slovak Interior Minister Robert Kalinak went to the airport to try sort out the situation, he said.

A spokesman for the Polish state air navigation agency said: "It is too early to comment, we are checking all the circumstances that led to this occurrence.

"The reason for the reported incident was unclear. Poland has been one of the countries most critical of Russia's actions in the Ukraine crisis, accusing it of aggression against its neighbour.

The Russian news agency RIA said its correspondent aboard the Tu-154 plane had been told by a crew member the pilots had received a message that Poland would not allow the flight to use its airspace, after which the plane made a sharp turn and flew to Bratislava.

A press official at the Russian embassy in Bratislava could not be reached for comment.