Novi Sad is the capital of the northern Serbian province of Vojvodina, and the administrative centre of the South Bačka District. The city is located in the southern part of Pannonian Plain on the Danube river. Novi Sad is the second largest city in Serbia, after Belgrade.
The city was founded in 1694, when Serb merchants formed a colony across the Danube from the Petrovaradin fortress, Habsburg strategic military post. In 18th and 19th centuries, it became an important merchant and manufacturing centre, as well as a centre of Serbian culture of that period, earning the nickname Serb Athens. Today, Novi Sad is an industrial and financial centre of the Serbian economy, as well as a major cultural hub.
Azerbaijan has made another contribution to the cultural life of Serbia, setting up the monument to the great Azerbaijan composer Uzeir Hajibeyli. The initiative belongs to the President of Azerbaijan Ilham Aliyev.
Addressing the ceremony, mayor of Novi Sad Igor Pavličić thanked President Ilham Aliyev for the support. The mayor has emphasized that as a multicultural country Serbia respects all national cultures and highly values an idea of dedicating a monument to Uzeir Hajibeyli in Novi Sad.
Then Azerbaijan and Serbian leaders unveiled the monument. Both Presidents addressed the inauguration. The inauguration ceremony was rounded off with a concert performed by the Uzeir Hajibeyli Azerbaijan State Symphonic Orchestra. 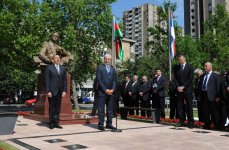