Azerbaijani embassy in South Africa organized a reception, dedicated to the national holiday of Azerbaijan - Republic Day for the first time, the embassy told Trend on Thursday.

The event was attended by representatives of the diplomatic corps, operating in the country, government and official institutions, academia, Azerbaijani and Turkish communities, local media and businesses.

Ambassador Elkhan Polukhov informed the guests about the Republic Day, and noted that this year marks the 20th anniversary of establishing diplomatic relations between the two countries.

Then the ambassador spoke about the plans of the embassy.

Te guest also expressed his hope that the presentation of Azerbaijani Embassy in South Africa will contribute to the development of relations between the two countries. 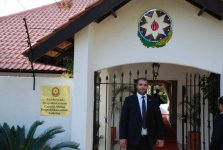