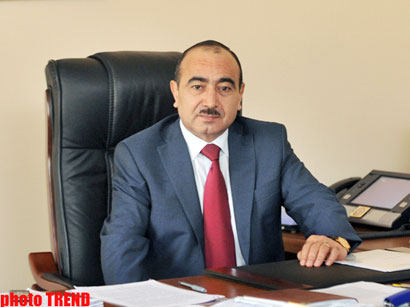 "Armenians, their lobby including such terrorist organizations as ASALA, which has been committing acts of terrorism in the past, spread the information that they will take revenge on Azerbaijan, and about the planning of other terrorist acts. We have received this information as well, and there already are existing threats to our embassies in other countries, as well as to Azerbaijanis living abroad," Hasanov said.

Azerbaijan, taking into account these threats, and is taking the necessary security measures, Hasanov noted.

"However, we declare to the whole world that it isn't only the policy of the Armenian lobby, but also the state policy of Armenia," Hasanov said.

The Armenians have been carrying out a policy of genocide against Azerbaijanis for many years. Khojaly genocide is one of those facts of genocide in our new story.

"The Armenians, using the case of Ramil Safarov carry out anti-Azerbaijan activity worldwide. They describe Azerbaijanis as cruel people who committed such actions against the Armenians. However the whole world knows that the punishment of Safarov is inadequately to the crime he committed. Safarov has served his sentence," Hasanov said.

His punishment in Europe, including in Armenia, would be a maximum of 15 years, and he had right for release due to the fact he had served more than half of that period, Hasanov said.

"He proved that he isn't a threat both in Azerbaijan and abroad by exemplary behavior during the imprisonment, and the relationships to others. The pardon of Safarov was carried out in the frame of the law. Therefore, neither governments of Hungary, nor the President of Azerbaijan made any mistakes," Hasanov noted.

He added that the hype of the Armenians has no grounds. Armenians pardoned people who have committed more serious crimes.

"We give and we will continue to give appropriate response to threats of ASALA. We believe that it is another campaign, and it will pass," Hasanov said.

The 6 page letter in Turkish language informs about the establishment of the organization in Lebanon with Iranian support.

Copies of the letter were sent to the British Guardian, the French Le Mons, the German Spiegel, the Russian newspaper Kommersant, the Arabic al-Salam, the Spanish El Pais, Abdullayev said, noting that the Armenian side once again is favoring terrorist methods.

In connection with the extradition to Azerbaijan and pardon of Ramil Safarov Armenian terrorist organizations, inspired by inciting and aggressive stance of the Armenian government, threaten the diplomatic missions of Azerbaijan and Azerbaijanis abroad.

The document, received on September 3 by the Azerbaijani Embassy in Hungary from the ASALA Fighters terrorist organization, calls as a target Azerbaijani diplomats, Azerbaijani students studying abroad, businessmen, activists of diaspora organizations, and states that they will be killed.

ASALA - Armenian Secret Army for the Liberation of Armenia - a terrorist organization, which operated from 1975 to the early 1990's.

ASALA was included in the list of terrorist organizations in the United States in 1980. It has committed numerous terrorist attacks against Turkish diplomats and citizens in different countries.