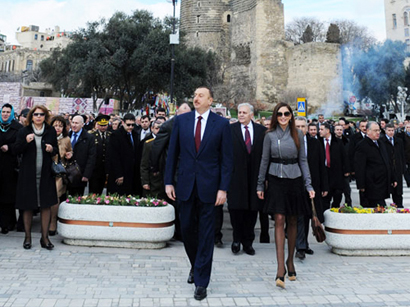 The president and the first lady visited the square in front of the Maiden Tower.

Children dressed in national costumes presented the president and his spouse with traditional sweets, and congratulated them on Novruz holiday.

Fighters carrying swords and shields reminiscent of Azerbaijan's ancient history stood on the walls of the Old City and in the square.

Dada Gorgud gave his blessing and expressed hope for the spring holiday to bring abundance to the Azerbaijani people.

President Ilham Aliyev lit the Novruz bonfire, and then made a speech.

Then the president and his spouse visited the National Seaside Park, and met the key characters of Novruz - Kosa and Kechal.

The festivities included the Oriental bazaar organized at the National Park featuring handicraft items made in different parts of the country, as well as wrestling competitions and exercises by athletes.

The head of state and his spouse viewed an exhibition of Azerbaijani carpets. The president of Azerbaijan and his wife then tried shish kebabs cooked on a brazier. Various sweets, the symbols of Novruz, were also on display at a ceremony demonstrating ancient folk crafts.

President Ilham Aliyev and Mehriban Aliyeva watched a presentation on the first European Games to be held in Baku in 2015.

Prime Minister Artur Rasizade, Speaker of the Parliament Ogtay Asadov, Chief of the Presidential Administration Ramiz Mehdiyev and other officials also attended the festivities on the occasion of Novruz.