John Debono handed his credentials to President Aliyev. The president then held a conversation with the ambassador.

Ilham Aliyev noted that bilateral relations between the two countries were at a high level. President Aliyev recalled with pleasure his meeting with the Prime Minister of the Republic of Malta and their discussions on the development of the bilateral ties.

Stressing that the two countries already maintain cooperation in the energy sector, the president underlined the necessity of expanding bilateral bonds in other spheres.

John Debono said his country was interested in enhancing bilateral relations with Azerbaijan on various fronts. During the meeting, the sides exchanged views on the issues related to cooperation between Azerbaijan and the European Union.

President of the Republic of Azerbaijan Ilham Aliyev also received the credentials of the newly-appointed Ambassador Extraordinary and Plenipotentiary of the Kingdom of Spain Rafael Mendivil Peydro Nov. 27.

Peydro conveyed greetings and best wishes on behalf of King of Spain Felipe VI to the president.

President Aliyev noted that Azerbaijan and Spain enjoyed active cooperation in political, economic and other fields. The president recalled with pleasure his meetings with the Prime Minister of Spain in international events and their fruitful discussions on further development of cooperation between the two countries.

Touching upon the successful activities of Spanish companies in the country, President Aliyev said there was big potential for the development of bilateral ties even further.

The president expressed his gratitude for the greetings of King Felipe VI and asked the diplomat to communicate his greetings to the Spanish King.

During the meeting, the sides exchanged views on the issues related to cooperation between Azerbaijan and the European Union. 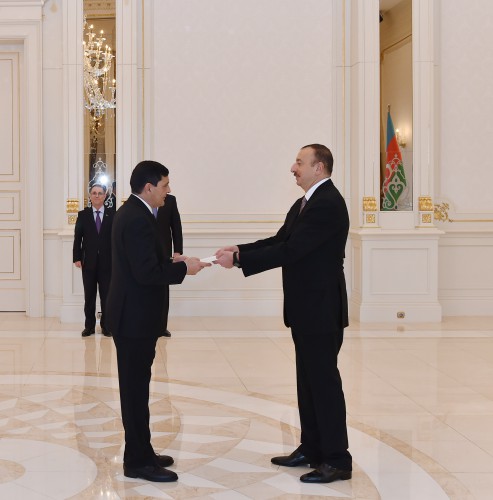