BAKU, Azerbaijan, June 26. President of the Republic of Azerbaijan Ilham Aliyev has attended the opening of the newly built Kalbajar-1 Small Hydropower Plant with a capacity of 4.4 MWt in Kalbajar district.

The plant built on the Lev River is the first energy production facility constructed and commissioned in Kalbajar after the liberation from occupation. 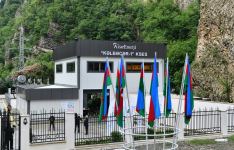