Azerbaijani youth commemorated the second anniversary of the tragedy in the Azerbaijan State Oil Academy.

The aim of the organizers of such terror acts anywhere in the world is to intimidate people and society, NAYORA chairman, MP Fuad Muradov said. He said that this incident did not intimidate the Azerbaijani society.

"Young people, gathering here, confirm that they did not forget this incident," he said. They remember all the bitterness and pain".

The chairman of the Union of Youth Student Organizations Shahin Ismailov said that the events happened two years ago shocked the whole Azerbaijan. Azerbaijani students have felt the pain most of all.

"Today, students gathered here to honor the memory of their comrades. This incident is very unfortunate. But the Azerbaijani youth must be steadfast and always be with their friends," he said. 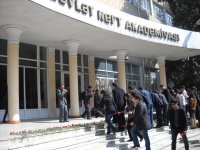