The third 180 kilometer stage started at 10:20 in front of the Gabala Executive Power building.

The sportsmen will cross the finish line here.

The fifth stage will cover the Baku - Absheron / Nardaran - Baku (the final six rounds of 13.6 km each). 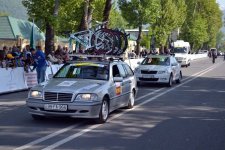