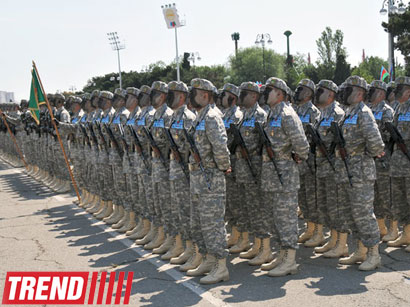 The Armed Forces Day of the Republic of Azerbaijan is celebrated in the country on June 26.

Despite the fact that Azerbaijan Democratic Republic (ADR), established on May 28, 1918, existed only 23 months, it did a lot much in a short period of time. The country started the creation of the national army, understanding that its own armed forces were needed to protect the achievements of the young republic.

At the same time, the situation in the region was extremely tense. The neighboring countries were openly expressing their plans to partition the Azerbaijan Democratic Republic and tear away its territories.

Detached Corps was created in accordance with the decision of the ADR government dated June 26, 1918. This decision became a legal basis for creation of the national army of the first democratic state in the Muslim East. Following this, the government made a decision on conscription.

Azerbaijan achieved significant results in creating its own armed forces in a short time.

Azerbaijan's national army repeatedly and successfully beat off the aggressive attacks of the Armenian militarists.

The Supreme Council of the Republic of Azerbaijan adopted a decision on the establishment of the national army on Oct.9, 1991.

June 26 was declared the Armed Forces Day in accordance with Azerbaijani president's decree dated May 22, 1998.

Voters in constituency 38: “We will definitely vote for Nagif Hamzayev” (PHOTO/VIDEO)
Society 21 January 18:00