The aircraft of Azerbaijani air force have returned home from Turkey after participating in the TURAZ Shahini-2015 joint military exercises there, Azerbaijani Defense Ministry said on Apr.7.

During the military exercises, the staff of Azerbaijani air force performed various military tasks, joint air flights, took part in the operation to rescue the pilots of crashed planes and other tasks, according to the ministry.

These exercises were held on the basis of the military cooperation plan between Azerbaijan and Turkey. 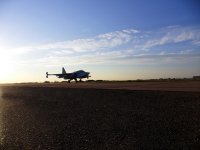