( WorldCarFans )- BMW's Concept CS is now showing off its futuristic interpretation of a sports coupe GT at the New York International Auto Show being held in Manhattan, NYC. The Concept CS you'll recall, made its first public appearance at the Shanghai Auto Show in 2007. The car, bigger than a 7 Series, is the next style benchmark for BMW, taking flame surfacing to its next level.

Featuring an interior fit for a proper GT, the Concept CS will definitely be built, according to our sources inside BMW. Meanwhile, the M3 Convertible also makes its American debut at the show. M3 Convertible fits the same 4.0-litre V8 found in the coupe and saloon versions. It pronounces 414 bhp from its natural aspiration. M DCT, the new double-clutch gearbox, has been presented in the M3 Convertible. The 7-speed transmission looks set to star in other BMW products of the near future, especially upcoming M cars as well as its twin-turbo powered cars.

Present too at New York are the new X6, 1 Series coupe and Convertible, and the stonking 335D. BMW and other German automakers are keen to get Americans into the diesel swing of things as quickly as possible. 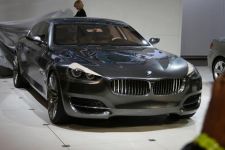