Latvian President: Economic co-operation is one of the most important factors in the bilateral relationship with Azerbaijan

Business Materials 17 January 2011 19:20
Although the geographic distance between Latvia and Azerbaijan is substantial, that has not been an obstacle against co-operation between our countries, the President of Latvia Valdis Zatlers said in his addressing speech at the Latvian-Azerbaijani Business Forum on Monday, the official site of Head of Latvian state reports. 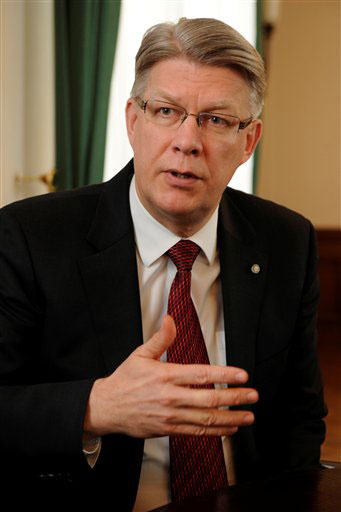 Although the geographic distance between Latvia and Azerbaijan is substantial, that has not been an obstacle against co-operation between two countries, the President of Latvia Valdis Zatlers said in his addressing speech at the Latvian-Azerbaijani Business Forum on Monday, the official site of Head of Latvian state reports.

"I am truly delighted that during previous business forums, businesspeople have established business contacts which have resulted in partnership agreements and indicate that businesspeople are truly interested in working together", Zatlers said.

The President noted that a prerequisite for economic contacts is successful political co-operation, including high-level political visits, as well as the necessary legal foundations for economic relations.

Speaking to Azerbaijani President Ilham Aliyev who is on an official visit to Latvia and attended the Latvian-Azerbaijani Business Forum, Zatlers said that visit of President Ilham Aliyev to Latvia confirms the successful co-operation between two countries, as well as the stability and mutual understanding that exist in the bilateral relationship between Latvia and Azerbaijan.

"I welcome the fact that the Latvian-Azerbaijani Intergovernmental Commission has proven to be an effective instrument in promoting and co-ordinating bilateral partnerships, also ensuring support for business priorities at the governmental level", Zatlers said.

Zatlers pointed out that the diverse nature of partnership is demonstrated by the declaration signed with President Ilham Aliyev on Monday, expressing dedication toward an expansion of the legal foundations of partnership between two countries so as to strengthen movement toward increased bilateral co-operation.

"We agreed that we both wish to facilitate economic growth by facilitating the accessibility of the market for goods and services, supporting improvements to the business environment, and organising regularly scheduled business forums. We also accented the importance of investments in expanding bilateral economic co-operation this declaration. Our promise is that we will maintain regular contacts and exchange experience in terms of international and regional security," Zatlers said.

Economic co-operation is one of the most important factors in the bilateral relationship between Latvia and Azerbaijan.

"Over the last few years, we have seen distinctly positive developments in this relationship. During the first three quarters of 2010, for instance, trade between Latvia and Azerbaijan increased by 10% in comparison to the same period in 2009. Over the course of the last five years, trade between our countries has increased by no less than 81%. That is an outstanding achievement. At the same time, however, it is clear that there is still significant potential for further developments in this area", Zatlers said.

"There are specific areas in terms of economic co-operation between Latvia and Azerbaijan in which there is much promise. This includes Latvia's highly developed chemical, pharmaceutical and information technology sectors, as well as our grocery industry and financial sector. There are also outstanding opportunities for greater business co-operation in areas such as construction, metal processing, the energy sector, electronics, transport and logistics, as well as education. Please allow me to cite two specific examples. In the area of information technologies, we see opportunities to expand co-operation with Azerbaijan in the area of linguistic technologies so as to promote the use of national languages in relation to information and communications technologies and solutions. We are delighted about the co-operation in this area which has begun successfully, and we see substantial potential for work with the Latvian Information Technology Competence Centre and its "Language Shore" initiative in developing linguistic technologies", said Zatlers.

Latvian President mentioned that another very promising direction for co-operation between the businesspeople of two countries is the computerization of the banking and insurance sector. Latvia has developed solutions which can be offered in this regard. In the area of food exports, there is also great potential for more active co-operation in terms of seeking out the best solutions for the delivery and distribution of products.

According to him, the Latvian government stands ready to offer all of the support that is necessary for the development of economic co-operation between Latvia and Azerbaijan. The large delegation of businesspeople who are here today have thus confirmed their interest in establishing and developing contacts amongst themselves.

"Latvia wants to encourage Azerbaijani businesspeople to invest in Latvia and to take advantage of the opportunities that we can offer - a secure business environment, our geographic location, our qualified labour force, our high level of potential in terms of innovations, as well as the fact that we are a part of the European Union's common market", said Zatlers.