Ilham Aliyev attended the opening of AZMDF plant, built in the area of the Absheron region (PHOTO) The employees of the facility welcomed the President warmly.

President Ilham Aliyev pressed the button starting the work of the facility and watched the production process. Then, he watched a film, featuring the activities of the plant.

The President was informed that the MDF - furniture materials, which had been imported from various countries of the world before, would be produced at the highest quality in Azerbaijan henceforth.

It was also noted that modern equipments and devices have been installed at the plant, built by the AZMDF company, which itself had been founded through private investments. These equipments have been supplied with operation programs of the German "Siemens" and Japanese "Mitsubitshi" companies. The plant plans to hire 500 employees. 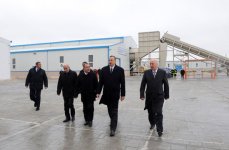