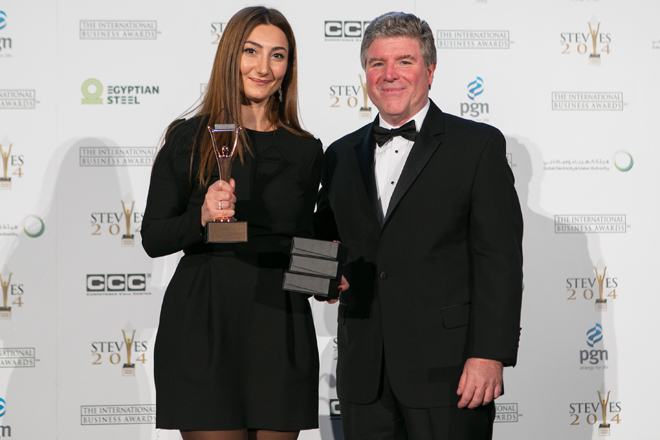 Azercell Telecom - the leading mobile operator of Azerbaijan continuously representing our country at the international arena, had an honor of winning prestigious International Business Awards Stevie 2014. The Company became the winner in the following 3 nominations for the innovations and cutting-edge projects implemented in the field of telecommunications:

• The Best Product of the Year (for regional "Bolge" tariff);

Paris, the capital of France, hosted a solemn ceremony for the winners of the International Business Award. Accepting the award, head of Corporate Communications of Azercell Telecom Nigar Shikhlinskaya noted the undeniable contributions of all employees in the successful business of the company, and briefed the event participants on Company's activities and projects.

Based on the voting of over 200 world-known business experts, entrepreneurs and businessmen, Azercell's "Bolge" tariff plan, tailored for the subscribers in the regions of Azerbaijan, was chosen as the winner in the nomination "The Best Product of the Year".

The Company was also awarded with the title "The Telecommunications Company of the Year" for 20% strengthening and expanding of its network, commercial launch of the 4G network, providing the fastest Mobile Internet in the country, the range of latest technological innovations and other achievements in Azerbaijan. In addition, implementation of the NPS (Net Promoter Score) system to measure the loyalty of subscribers was recognized by the jury with a 3rd award - "The Best Customer Сare Services of the Year".

The "Stevie" award is being represented to the companies that have tangible contributions on the world scale. The mission is to increase the profile of successful companies as well as to recognize individuals that have distinct achievements among mass media, business circles and broader public. For a short time since its inception the award became one of the most prestigious in the business world. The first "American Business Awards" ceremony was held in 2002, and then in 2003, the "International Business Awards" was established and presented.

With 51% share of Azerbaijan's mobile market Azercell's network covers 99,8% of the country's population. By the end of 2013 the number of Azercell's subscribers reached 4,5 million people. In 2011 Azercell deployed 3G and in 2012 the fourth generation network - LTE in Azerbaijan. The Company is the leader of Azerbaijan's mobile communication industry and the biggest investor in the non-oil sector. Azercell is the part of the TeliaSonera Group of Companies, which has subsidiaries in 17 countries with total number of 186 million subscribers and 27 thousand employees.