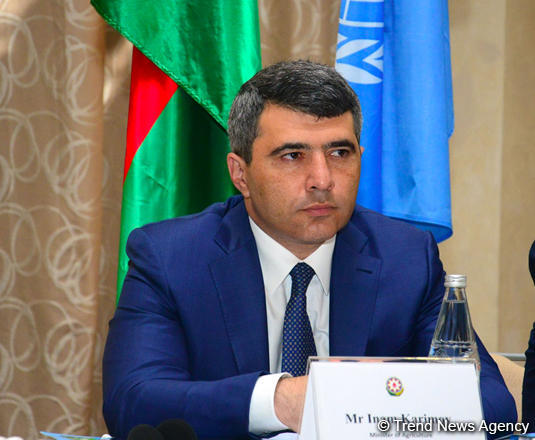 He said that the economy is the most important area of ​​cooperation between the two countries.

Karimov stressed that relations between the two countries have a long history and they are strengthened every day thanks to the efforts of the leaders of both countries.

“The trade turnover in the field of agriculture between Azerbaijan and Turkey amounted to $192 million in 2017,” said the minister. “In 2013-2017, the value of agriculture products exported from Azerbaijan to Turkey increased by 65.3 percent, and imports grew 2.3 times.”

Speaking about regional cooperation, the minister touched upon the projects being implemented together with Turkey, such as Baku-Tbilisi-Kars and the Southern Gas Corridor.

“The main task of the state is to diversify the economy and great attention is paid to agriculture, which is one of the main areas of the non-oil sector,” the minister said. “The development of this area is impossible without innovative technologies. Therefore, steps are being taken to introduce technologies in the agriculture sector.”

In addition, the state strongly supports entrepreneurs operating in the field of agriculture, by offering benefits and exempting them from taxes, he noted.