Prospects for the development of a tobacco production factory in the Sinjan village of Oghuz district and the possibility of providing additional support to the enterprise were discussed in Azerbaijan, the Agency for the Development of Small and Medium-Sized Enterprises (SMEs) told Trend.

Chairman of the agency's Board Orkhan Mammadov, Head of the district's Executive Power Eyvaz Gurbanov, Deputy Director of Oghuz Agro Industry LLC Namik Alasgarov and a Japanese investor of the enterprise Munechik Tanio participated in the discussions and considered prospects for expanding the enterprise's activities and respective cooperation.

The project is being implemented within the framework of the "State Program for the Development of Tobacco Growing in Azerbaijan for 2017-2021".

The works on cultivation, supply and drying of tobacco are carried out at the enterprise based on foreign investments.

Tobacco was planted on an area of 210 hectares located in the Oghuz, Gabala and Tovuz districts, and 50 units of automated drying chambers for tobacco leaves were imported from European countries for drying the crop.

The Japanese investor contributed $2.2 million to the project. Currently, the factory employs 150 people and more than 300 seasonal employees.

The agency has provided support and services to the factory to facilitate coordination with public and private structures for the creation and expansion of the factory and the use of state support mechanisms for entrepreneurship.

The factory also received a document on investment promotion, which exempts it from profit tax for 7 years by 50 percent as well as from property tax, land tax, VAT on imported equipment and customs duties.

In the coming years, it is planned to expand the production; along with the Oghuz, Tovuz and Gabala districts, tobacco farms will be created in Shaki, Zagatala, Gakh, Ismayilli, Masalli, Tovuz and Balaken. Moreover, it’s planned to conduct joint trainings with the agency for tobacco farmers and organize a visit to Japan whose investors are interested in supporting tourism, agriculture and other industries. 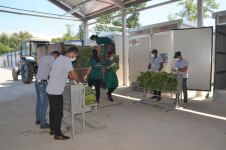