Oil&Gas Materials 15 September 2011 18:41
Azerbaijan is interested in developing cooperation with France in the industry and alternative energy, Azerbaijani Minister of Industry and Energy Natig Aliyev said at a meeting with French Minister of Energy, Industry and Digital Economy Eric Besson in Paris, Azerbaijani Ambassador to France Elchin Amirbayov told Trend. The sides discussed the current state of bilateral cooperation in oil and gas industry and its prospects. French minister appreciated Azerbaijan's role in the energy security of Europe and expressed his country's readiness to share experience in this field.

The reserves of the field are estimated at 350 billion cubic meters of gas and 45 million tons of condensate.

The Agency for Alternative and Renewable Energy operates under the Ministry of Industry and Energy.

About 1 million manat was allocated for primary research in alternative and renewable energy sources in Azerbaijan. About 40 million manat were allocated from the state budget to implement pilot projects in this area. 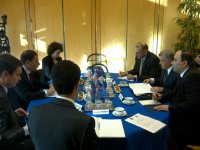