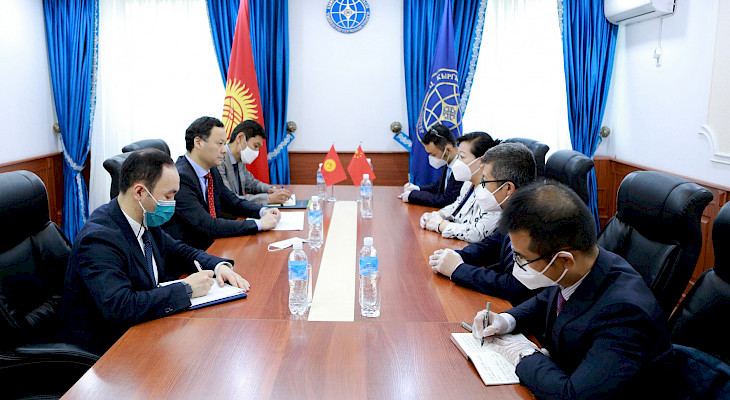 Minister of Foreign Affairs of Kyrgyzstan Ruslan Kazakbaev met with Chinese Ambassador to the Kyrgyz Republic Du Dewen on the eve of his official visit to the People's Republic of China as part of his participation in the second meeting of foreign ministers in the Central Asia-China format on May 10-12, 2021 in Xi'an, Trend reports citing Kabar.

The press service of the Ministry of Foreign Affairs of Kyrgyzstan reported that during the meeting, an exchange of views took place on topical issues of bilateral relations, as well as on the agenda of upcoming talks between the heads of the foreign affairs agencies of the two countries.

Chinese Ambassador Du Dewen expressed deep condolences to the families and friends of the killed Kyrgyz citizens as a result of the armed conflict at the Kyrgyz-Tajik border.

She also noted that China, being a reliable strategic partner of Kyrgyzstan, welcomes the efforts made by the leadership of Kyrgyzstan to resolve the incident at the Kyrgyz-Tajik state border peacefully, to maintain peace and stability in the region.

The Chinese side expresses the hope that the early achievement of peace and stability will be ensured through diplomatic efforts through negotiations.