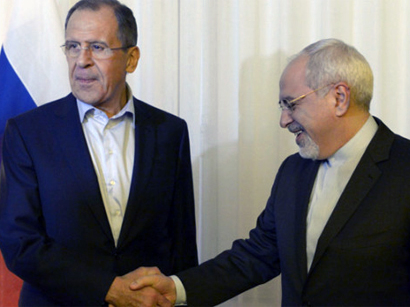 Upon his arrival in the Iranian capital, Lavrov was welcomed by Deputy Foreign Minister for Asia and Pacific Affairs Ebrahim Rahimpour.

The Russian foreign minister is also slate to hold talks with President Hassan Rouhani during his stay in Tehran.

Earlier, Foreign Ministry Spokeswoman Marziyeh Afkham briefed the reporters about Lavrov's visit to Tehran, and said, "Tehran and Moscow are in constant talks on regional issues, specifically Syria and during this visit the two sides will also discuss this issues, Geneva II meeting to be held in the near future."

"Iran and Russia have very close viewpoints on the Syrian crisis and ways to put an end to the ongoing crisis in the Muslim country," Afkham said.

Sanayee, who has recently been assigned to the ambassadorial job, said Tehran attaches special importance to its bilateral ties with Moscow, and "expansion of relations with Russia is among the priorities of the government (of President Rouhani)".

The Iranian ambassador described Russia as an influential country on the scene of international politics, and said, "Fortunately the political will of the Iranian and Russian officials has been precisely oriented towards consolidation and expansion of bilateral ties."

During the meeting, President Rouhani and Rogozin expressed the hope that the current relations between the two friendly nations would bolster in all domains.

Iran and Russia have vast cooperation in different fields, especially in political and economic spheres.

The two also enjoy special position on the international scene and have long held constant consultations on key regional and global issues.

Russian banks are participating in schemes to finance Iranian oil exports, which are the target of US and European sanctions against Tehran.