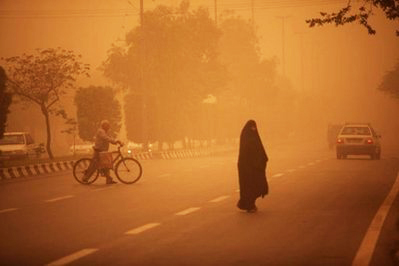 There should be long term plans to control air pollution in the city of Tehran, head of environmental and civil services committee of Tehran City Council Arash Hosseini Milani told Trend.

"Air pollution was present in Tehran city almost every day in the past month, while Iran Meteorological Organization has warned about possible air pollution in the autumn season," he said.

"Tehran has specific geographic conditions and if air circulation faces difficulties, it could result in unhealthy situation," Milani said.

He added that measures have been taken in past 30 years to control air pollution in Tehran, and there was some success.

"Currently more than 50 percent of diesel consuming buses have been transformed to gas fuel system, while subway lines have been developed and 12 percent of daily inner city travels is done via subway system. This was useful to somewhat curb the air pollution, but not enough," he said.

"Despite drought and climate change, it is possible that the air circulation capacity of Tehran in the future would be less than current volume, therefore there must be plans to control air pollution," he said.

"The budget for this plan was $4 billion, which was estimated based on prices of the last Iranian year (started March 21,2019) and the government should help to finance the plan," he said.