Armenia Materials 19 March 2014 16:17 (UTC +04:00)
Residents of seven rural communities of the Aragatsotn provinces as a part of their ongoing protests decided to block the main road passing by the villages of Ohanavan and Ushi, 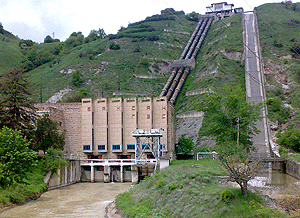 Residents of seven rural communities of the Aragatsotn provinces as a part of their ongoing protests decided to block the main road passing by the villages of Ohanavan and Ushi, as well as the road leading to the site where the hydroelectric power station is to be built, epress.am website quotes resident of the Ushi village Lena Petrosyan as saying on March 19.


A labour strike was declared in the villages with women and schoolchildren joining the protesting men according to Petrosyan.

The villagers are angry at the fact that Armenian Deputy Prime Minister and Minister of Territorial Administration Armen Gevorgyan did not fulfil his promise and did not meet with them personally in order to listen to their concerns on site.

"On March 14, the people came out again, waited and then told the meeting would not take place. They were promised that Gevorgyan would definitely come at the start of this week but were yet again let down. Now people are angry and gathering from the villages to block the road, but police officers will not allow us," Petrosyan said.

It can be recalled that on March 6, hundreds of villagers blocked the Ohanavan- Ushi road for several hours and demanded a stop to the construction of the hydroelectric power station which they claim will deprive them of irrigation water.

The protestors say the power plant will consume so much water from the Aparan reservoir that that their gardens and yards will dry up. Their protest succeeded in the removal of construction equipment from the site.