Georgian almonds to be exported to EU this year 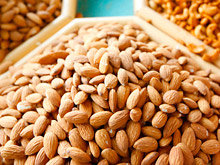 The Georgian Ministry of Agriculture and the Association of Almond and Walnut Growers of Georgia are working to begin exports of Georgian almonds to the European Union market, the Association Founder Tornike Latatia told local radio station Commersant, Trend reports citing Agenda.ge.

Latatia said Germany, France, Italy and the United Kingdom were the markets being considered for exports.

"Although almonds grown in Georgia have not yet entered international markets, its export potential will be displayed this year, and almonds from Georgia will be exported to EU countries", Latatia said.

He added 90 percent of the almond varieties cultivated in Georgia were European, with some American varieties also being grown in the country.

"This is being done in order for almonds grown in Georgia to become acceptable for international markets", he said, adding there were two factories processing the fruit in Georgia.