Abbas: No talks with Israel until '67 borders recognised

Palestinians will not restart peace talks with Israel until they receive recognition that the borders which existed before Israel captured the West Bank in 1967 form the boundaries of their future state, and Israel halts settlement activities, President Mahmoud Abbas said Tuesday, DPA reported.

"If settlement activity were to stop completely for a specific period and borders of a (Palestinian) state were declared within the 1967 borders, we would go to negotiations," Abbas told a meeting of the Palestine Liberation Organization (PLO) Central Council in Ramallah.

He said last month's decision by Israeli Prime Minister Benjamin Netanyahu on a 10-month partial moratorium on construction in West Bank settlements "is not considered a stop of the settlement activities."

He said, however, that Palestinians would not resort to violence to achieve their aims.

Earlier in his one-hour speech Abbas repeated his announcement, from November 5, that he will not contest the next presidential elections.

"I will not run again for presidency in any upcoming presidential elections," he said.

The 126-member Council, the PLO's equivalent of a parliament, is expected, during its two-day meeting, to ask Abbas to remain in power until new elections are held.

Abbas was elected president in January 2005, following the death several weeks earlier of Yasser Arafat. His term of office is due to expire on January 25.

Parliamentary and presidential elections had been scheduled for January 24, but the Palestinian Central Election Commission said at the end of the November that they could not be held, owing to the political split between Abbas' Palestinian Authority in the West Bank and the Hamas movement which rules the Gaza Strip.

Hamas, which won the 2006 legislative elections, has rejected holding elections until a reconciliation pact is signed, ending a bitter rift between it and Abbas' Fatah party.

The Islamist movement, not part of the PLO, also says Abbas has no mandate to remain in office after his term expires. Under Palestinian law, his replacement until a new president is elected would be Palestinian Legislative Council Speaker Aziz Dweik, a Hamas member.

An Egyptian plan for reconciliation between Hamas and Fatah calls for elections to be held in June. The agreement has not yet been ratified by either party.

Abbas' resignation announcement in November drew anxious responses from world leaders, who feared for the future of the peace process without the relatively moderate Palestinian leader as Israel's negotiating partner.

An opinion poll released Monday by the Palestinian Centre for Policy and Survey Research, indicated that Fatah, would easily defeat Hamas if elections were held now - 43 per cent to 27 per cent.

Abbas would also easily defeat Hamas leader Ismail Haniya in presidential elections, the poll found - 62 per cent to 38 per cent. 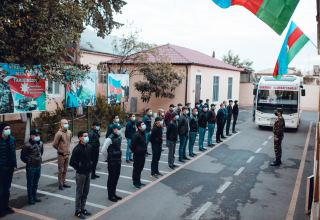 Azerbaijani-Iranian border outposts reopen after being liberated from Armenian occupation