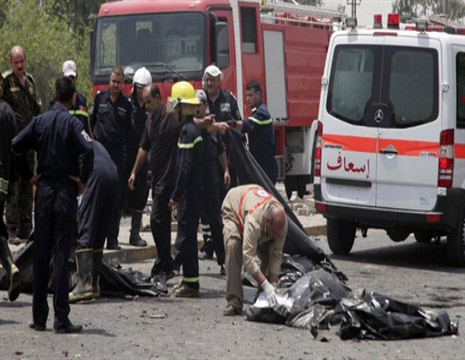 Two brothers were killed and three of their family members were wounded in a bomb explosion in their car in Salahudin province, north of Baghdad on Saturday, a provincial police source said, Xinhua reported.

The blast took place at 7:50 a.m. (0450 GMT) when a magnetic bomb attached to the car of a jeweller detonated while he and his four sons were running in the central of the Tuz-Khurmato town, some 90 km east of the provincial capital Tirkit, the source told Xinhua on condition of anonymity.

The blast killed two of the jeweller's sons, wounding him and his other two sons, the source said.

The town is part of the disputed areas between the Kurds and both Arabs and Turkmans, as the Kurds seek to expand their autonomous region in northern Iraq to include the oil-rich and ethnically-mixed province of Kirkuk and other areas in Iraq's Nineveh, Salahudin and Diyala provinces.

Oil exports from eastern and central Libyan oil ports to be shut
Oil&Gas 11:25