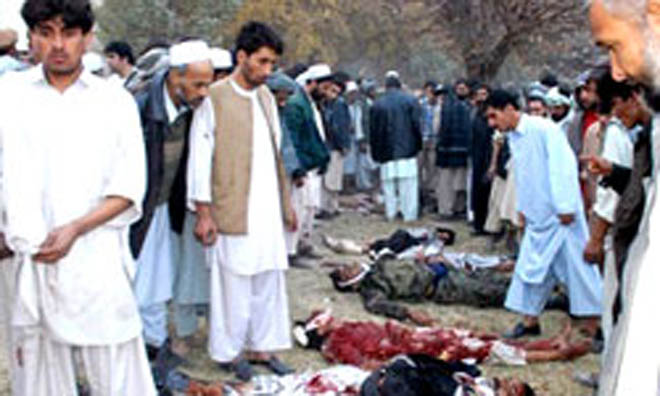 An acting provincial governor and six others including senior officials were injured in a blast in eastern Afghanistan on Thursday while four civilians were wounded in rocket attacks in Kabul city, officials said, DPA reported.

Tahir Khan Saberi, the acting governor for the south-eastern province of Khost, was holding a meeting with other provincial officials in his office when a bomb hidden inside the building was detonated Thursday morning, General Mohmmad Nawab said.

Saberi's chief of staff and head of education for the province were among those wounded, he said, adding that their injuries were not life-threatening. Two local journalists were also among the injured.

The attack came around a week after seven CIA agents and a Jordanian spy were killed in a suicide attack inside a US military base in the province. Al-Qaeda reportedly claimed responsibility for the attack.

In the Kabul attack two rockets hit residential buildings and a third one landed inside a garden in Qalacha, an area in the south-eastern part of the city, the Interior Ministry said in a statement.

The statement said the attacks injured a mother and two of her children, but a policeman in the area and a NATO statement said four civilians were wounded in the blasts.

Taliban spokesman Zabiullah Mujahid said that the rockets were aimed at the US embassy in Kabul, but did not provide further details.

Four US senators - John McCain, Joe Lieberman, John Thune and John Barrasso - are currently visiting Kabul. The area where the rockets hit is around 3 kilometres from the US embassy.

On Wednesday, four children who had gathered around US soldiers visiting a US-funded road project were killed when one of the vehicles hit a roadside bomb in the eastern province of Nangarhar.

One Afghan police officer was killed and dozens of others, mostly schoolchildren and three US soldiers, were injured in the attack.

Afghan civilians have borne the brunt of the US-led international war against the Taliban and their al-Qaeda associates.

The war began after the coalition forces ousted the Taliban regime in late 2001.

The Afghanistan Rights Monitor, an independent human rights watchdog, said Wednesday that 1,050 children under 18 were killed in the conflict last year.

Around 70 per cent of them were killed by insurgents while the rest died in Afghan and international military operations against the Taliban militants.