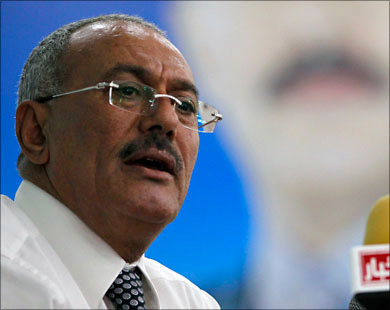 "The Unites States welcomes Saleh's resolution (of authorizing his deputy)," Saba cited the assistant to the U.S. president for counterterrorism, John Brennan, as saying.

Brennan was quoted as telling Yemeni Vice President Abd-Rabbu Mansour Hadi by phone that the United States is keen to see the success of the dialogue among all Yemeni political forces, which would lead to an end of the political, security and economic crises in the country as soon as possible.

Saleh, who has been facing eight months of protests demanding an end to his 33-year rule, is still in Saudi Arabia for rehabilitation for injuries sustained in an attack on his palace in early June.

Earlier this week, the embattled president issued a decree authorizing his deputy Hadi to sign the GCC initiative after launching a dialogue with the opposition to set a timetable and a mechanism to transfer power.

The opposition, however, rejected Saleh's move immediately, requiring him to sign the deal first rather than resorting to " unacceptable and complicated" political maneuver.