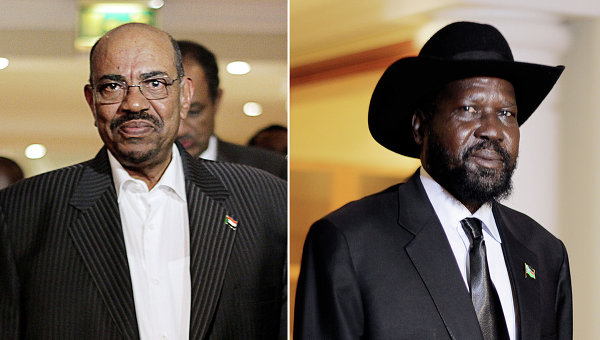 The leaders of Sudan and South Sudan agreed to set up a demilitarized buffer zone on the border between the two states during Saturday's talks in Ethiopia, African Union mediator Thabo Mbeki said.

The two leaders made no comments after the talks, RIA Novosti reported.

Al-Bashir and Kiir agreed last September to end violence in border districts and withdraw troops from disputed regions in order to resume oil extraction in South Sudan and its transit via the Sudanese territory. The agreement has never been put into practice, however.

By the end of 2012, oil extraction was suspended at South Sudanese deposits as Khartoum refused to transport oil for export via its pipeline network, demanding Juba to crack down on militant groups operating in border territories.

South Sudanese authorities, in their turn, accused Sudan of shelling the country's territory and supporting rebels fighting with government troops.

In late December South Sudanese army downed a UN helicopter with Russian crew onboard after it mistook it for a Sudanese aircraft violating its airspace.