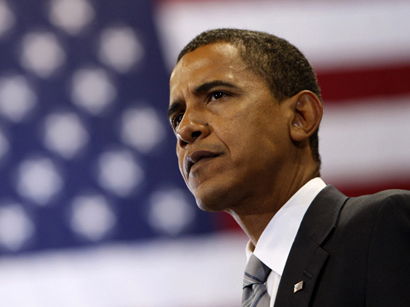 US President Barack Obama signed into law a short-term budget bill Tuesday that removes the looming threat of a government shutdown by funding the US government through the end of the year, DPA reported.

The lower chamber of Congress passed the measure last week 318-109, a day after the upper Senate had approved the effort 73-26.

The budget provides 1 trillion dollars through the end of the budget year on September 30, but maintains 85 billion dollars in across-the-board austerity measures that took effect earlier this month. The measure however allows certain government departments, including the Defence Department, more flexibility in enacting the mandatory cuts.

Congress has been under pressure to produce a bill because if a short-term funding blueprint had not be agreed to before March 27, the government would have run out of money.

To avert a government shutdown Congress has had to pass a series of short-term measures because it did not pass a year-long budget.

The threat of a government shutdown was the latest budgetary standoff between Republicans, who control the House of Representatives, and Obama and his Democratic Party, which controls the Senate.

The sides now turn to consideration of a 2014 budget, which could prompt a standoff over government spending cuts and Democrats' demands for higher taxes.