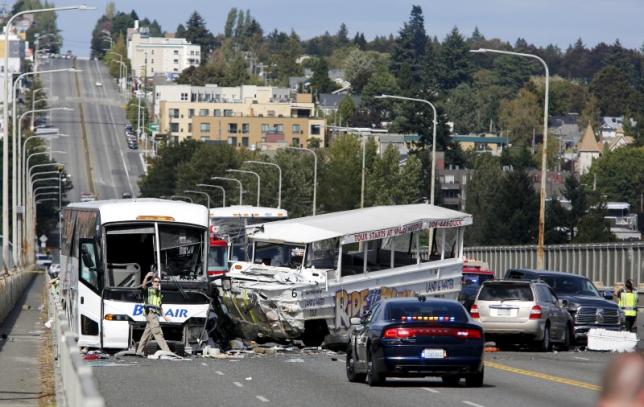 Seattle Mayor Ed Murray said 51 people were treated at area hospitals, with 15 of those in critical condition, after the crash on the busy Aurora Bridge, which crosses a canal linking Lake Union with the Puget Sound's Shilshole Bay.

Local TV footage showed the side of the charter bus caved in with glass and debris on the ground. The Ride the Ducks amphibious bus, which had less damage, was missing a front wheel and its front end was slightly crumpled.

Investigators are reviewing witness reports of "a possible mechanical issue" on the duck vehicle, police said.

North Seattle College said approximately 45 students and employees from its international programs were on the charter bus.

"We extend our deepest condolences to the families of these deceased students, as well as to the students and employee who sustained injuries," Warren Brown, the college's president, said in a statement.

A witness to the crash, Jesse Christenson, 32, saw the duck boat with its turn signal on trying to get in the left lane, and then it made a sharp move to the left.

"I initially thought it was a (tire) blow out. The duck boat then hit another car with a roof rack then went head on into the oncoming tour bus," Christenson told the Seattle Times newspaper. "The scene was pretty gruesome ... There were people in shock."

Traffic safety on the bridge, which has no median barrier, has been a concern of state and local officials.

The people on the charter bus suffered the majority of the significant injuries, a fire department spokeswoman said. Two other vehicles were involved in the crash, she said.

"Our thoughts and prayers are with the families involved in today's tragic accident," Ride the Ducks said in a statement.

The National Transportation Safety Board said it will investigate.

The accident comes nearly five months after an amphibious sightseeing vehicle hit and killed a woman on a Philadelphia street. In 2010, two tourists were killed when a tugboat pushed a barge into a Ride the Ducks vehicle, also in Philadelphia.