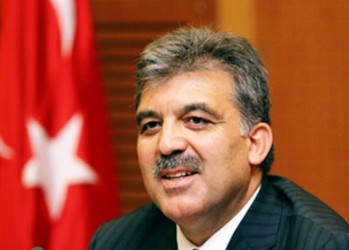 Turkish President Abdullah Gul raised his objection to an outright military intervention by foreign powers in Syria, warning that such a move might easily be misconstrued, Today's Zaman reported. During a working visit to Tunisia on Thursday, he said, "Such an [outside] intervention, if it happens, could risk being exploited," without further elaborating.

Expressing his satisfaction with the first international meeting discussing the Syrian crisis, which was held in Tunisia, Gul pointed to his Tunisian counterpart Moncef Marzouki's humanitarian credentials and his emphasis on human rights. "It is impossible that [someone like] Marzouki would remain silent in the face of the humanitarian situation in Syria," Gul stated. In parallel remarks, Marzouki also dismissed foreign intervention in conflict-torn Syria, however, saying that if the Arab League initiates a peace mission into the country, Tunisia would join.

"We [Tunisia] are opposed to options like arming the opposition or a foreign military intervention, which would increase the severity of the situation in the country instead of being a way out of the crisis.

However, Tunisia is ready to contribute to an Arab League peacekeeping force to Syria," said Tunisian president.

During the conference, Gul praised Tunisia's successful democratic experience, saying that the country constitutes a good example and a hope for others who would go through a democratic transition. "Protecting national integrity after making a revolution on Jan. 14 [2011], establishing a democratic parliament under the monitoring of international community, making important headway towards plurality and rule of law and electing a government after all those successful processes, Tunisia is a hope for other countries which are on their way to democratic transition," Gul noted.

Gul also said that it is not a coincidence the revolutions that swept through the Middle East and North Africa began in Tunisia thanks to the educated working class of this country, which has close relations with the west.

"It is not a coincidence that the revolution in the Arab world began in Tunisia. This country does not have just one resource such as oil or natural gas. It has an educated working class. This country has close relations with the West. This is the picture that brought the revolution and made it take place in the most bloodless way possible," Gul told reporters on board the plane as he was flying to Tunisia.

The president also talked about the issue of Turkey's becoming a model for the Arab Spring nations where dictatorial regimes were toppled thanks to public protests such as in Tunisia Egypt and Libya. He said the argument that Turkey is a model for these countries may be offensive as every country has its own identity and honor; however, he said Turkey is sharing its experience of restoration following 2002 with Tunisia without raising its voice and being didactic.

"Deputy Prime Minister Besir Atalay and State Minister Cevdet Yılmaz come to Tunisia with this aim. It is very important for the current government in Tunisia to be successful. The fact that Ennahda is leading the government makes this issue more important. The success or failure of the government here will have an influence on the region and the Islamic world," said Gul.

The president also commented on the history of relations between Turkey and North Africa and said there is a complex-free love for Turkey in the hearts of the people of North Africa.

"There is a more sincere bond of sincerity between Turkey and Tunisia than any other countries in the region. One of the important reasons for this is that almost all the people here know that thanks to Turks and the Ottomans, their fate did not resemble the fate of Andalusia. This reality is better known in Tunisia than it is known in Turkey. North Africa is principally responsible for the Mediterranean being a Turkish lake," he added.

In remarks to the Tunisian Parliament later on Thursday, Gul said he is excited and proud to stand before Tunisian deputies as the first ever foreign president to address Tunisia's constitutive assembly.

"I am excited because you are not writing history, but you are making it," Gul told Tunisian lawmakers.

Gul said Turkey and Tunisia are tied up by strong friendship, adding that the Turkish people had greatly welcomed achievements Tunisia has made so far.

"You are the only assembly among the countries of the Arab Spring that has proven successful in electing a president, a parliament speaker and in forming a government. This parliament is a temple of democracy which is looked upon by all brother nations fighting for freedom, justice and honor," Gul said.

He added that he is confident that the Tunisian national assembly would make a new constitution that would guide a democratic and prosperous Tunisia. "Successful completion of the democratization process in Tunisia will guide and inspire all people in Egypt, Libya, Yemen and Syria. That is why you have to be successful not just for Tunisia but for all Arab nations, all Muslims and for humanity," he underlined.

According to the Turkish president, Tunisia's successful transformation would also completely negate "an orientalist superstition" that democracy and Islam, and modernity and the region's socio-cultural fabric were mutually exclusive. He urged Tunisian lawmakers to uphold democratic legitimacy and democratic consensus to achieve peace, security and stability as well as expanding prosperity in the country. Gul noted that the key to Tunisia's success will be focusing all of the energy on economic development and democratic reforms without giving credit to revenge or attempting at any social engineering project.

The president said Turkish Eximbank allocated $500 million for Tunisian businessmen to boost investments in the North African country, adding that Turkey's International Development Cooperation Agency is set to open an office in the country.

President Abdullah Gul said on Wednesday that it is not right to pursue revanchist feelings regarding the Feb. 28, 1997 military coup, while he stressed the importance of eliminating the victimization of people who suffered during this period. On his way to Tunisia, Gul talked about the importance of the confrontation with the Feb. 28 intervention, which is known as a postmodern coup when the military toppled a coalition government led by a conservative party; but he said it would be wrong to have revanchist feelings about it. At the time, Gul was a deputy from the now-defunct Welfare Party (RP), which was ousted by the military. Regarding what needs to be done to confront the Feb. 28 coup, Gul said: "One of the two things that need to be done is to ensure that there is an environment in the country that will never make such an intervention possible again. The other thing that needs to be done is to eliminate the victimization of all the people who suffered during this period." Not only were fatal blows dealt to fundamental rights and freedoms after the coup, but democracy and the rule of law were also suspended. The coup introduced a series of harsh restrictions on religious life, with an unofficial but widely practiced ban on the use of the Islamic headscarf, preventing thousands of women from studying at university due to their headscarf.