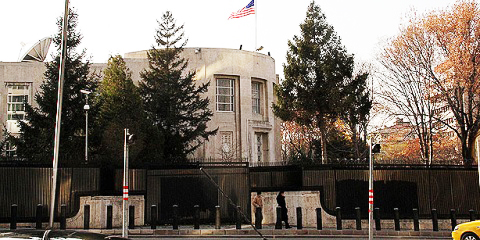 The U.S. Embassy in Ankara said on Dec. 3 it had received reports that "extremist groups" may be planning an attack against a Syrian opposition group in the southeastern Turkish city of Gaziantep Hurriyet Daily News reported

It did not specify who might be targeting the Western-backed body, which sees itself as a government-in-exile but has little influence over rebels fighting to overthrow President Bashar al-Assad in a conflict that has been complicated by the successes of rival hardline Islamist groups.

"The U.S. Embassy has received reports that extremist groups may be planning an attack against the Syrian Interim Government building," the statement said.

"We remind U.S. citizens that the situation in southeast Turkey, while usually calm, can change without warning and U.S. citizens should avoid travelling in areas close to the Syrian border," it said.

The body was formed by the Western-backed National Coalition for Syrian Revolutionary and Opposition Forces in November 2013. Early this year it set up its headquarters in Gaziantep, a province bordering Syria.

It exists to provide local services and support in rebel-held areas in Syria but fighting, political squabbling and the reluctance of donors to support a partisan body have limited its influence.