99% of voters registered at the Embassy of Turkmenistan in Azerbaijan, voted in the presidential election (PHOTO) On Sunday, presidental elections were held in Turkmenistan. As of 16:00 99% of all registered voters executed their constitutional right and voted in the elections, told Trend in the embassy of Turkmenistan in Azerbaijan.

For the citizens of Turkmenistan, located in foreign countries were also established polls at diplomatic missions and consular offices of the country.

This morning at 8:00 o'clock, in the presence of citizens of Turkmenistan, Ambassador Extraordinary and Plenipotentiary of Turkmenistan to the Republic of Azerbaijan Toyly Komekov opened the polling place for voting citizens.

To get acquainted with the election at a polling station at the Embassy of Turkmenistan in Azerbaijan came the heads of diplomatic missions in the Republic of Azerbaijan - Ambassadors of Belarus, China, Uzbekistan, Russia, Kazakhstan, Tajikistan, as well as heads of international organizations.

Arriving guests appreciated the level of the organization and conduct of elections in the Turkmen embassy in Baku, to all relevant international legal norms and the highest democratic standards.

The voting process was covered by local and international media.

Citizens of Turkmenistan have shown high activity in the voting. As of 16:00 voted 99% of all voters registered at the embassy, ​​and exercised their constitutional right to choose a worthy candidate for the post of President of Turkmenistan.

In Azerbaijan, the Embassy of Turkmenistan for citizens wishing to vote early, opened the polling station from 2 February.

Polling stations were opened in Turkmenistan at 8 am local time on Sunday.

Eight candidates are competing at the presidential elections.

In general, 2,307 polling stations are opened, 29 of which operate abroad under foreign diplomatic missions of Turkmenistan. The number of voters is 2.987.324 million people.

The elections are being observed by 2,340 national observers, as well as observation mission from the CIS (63 people), which includes representatives of the CIS member states, Inter-parliamentary Assembly of the CIS member states, Parliamentary Assembly of the Union of Belarus and Russia, as well as the CIS Executive Committee. 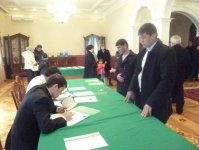 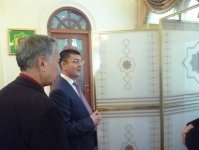