Azerbaijani Foreign Minister Jeyhun Bayramov met with the OSCE Chairperson-in-Office, Minister of Foreign Affairs of Sweden, Ann Linde, who is on a working visit to Azerbaijan, Trend reports referring to the Azerbaijani MFA.

The meeting was attended by extended delegations from both sides.

In the course of the meeting, Bayramov noted the development of bilateral relations between the countries in a number of areas, stressing the existence of great opportunities for expanding this cooperation.

The minister added that the continuation of the political dialogue between states, the implementation of high-level mutual visits, the expansion of cooperation on international platforms are of great importance.

Bayramov also informed his colleague about the current situation in the region, the process of implementing the trilateral statement, actions of Armenia that contradict the provisions of the trilateral statement of November 10, 2020, including the sending of a terrorist group and attempts to send its servicemen in civilian clothes to the territory of Azerbaijan, as well as Armenia's refusal to provide maps of minefields, etc.

In turn, Sweden FM Ann Linde noted that she had a very useful meeting with the head of state and discussed many issues with him in detail.

Linde also stressed the importance of identifying areas in which the OSCE can contribute to improve the existing situation in the region.

During the meeting, the ministers exchanged views on cooperation between Azerbaijan and the OSCE.

The officials of both sides also discussed other issues of mutual interest. 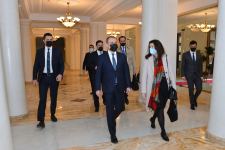