Single student card will be applied at UNEC (PHOTO) A presentation of the "Single Student Card" was held at UNEC, Trend reports with reference to the university.

The event was attended by the rector of UNEC, professor Adalat Muradov, first deputy chairman of the Central Bank Alim Guliyev, regional director of the company “Mastercard” Suleyman Sozeri, representatives of the bank and heads of relevant departments of the university.

Speaking about the project's preparation for two years, the rector thanked the bank's management for selecting the UNEC as a pilot university for the project's implementation by the Central Bank. Speaking about the advantages of "single student card", A.Muradov said that students will be able to enter the educational institution and the library with the same card, they will be able to make non-cash payments in obtaining scholarships, transportation, as well as in domestic and foreign trade networks.

First Deputy Chairman of the Central Bank of Azerbaijan Alim Guliyev expressed his satisfaction with the application of the project firstly at Azerbaijan State University of Economics, from which he had graduated from. He emphasized that this university is one of the most leading universities of the country with innovative projects in recent years. A.Guliyev spoke about the strategic directions and implementation measures of the "State Program on the expansion of digital payments in the Republic of Azerbaijan in 2018-2020", approved by the decree of the president of Azerbaijan of September 26. It was noted that according to the approved action plans within the framework of the State Program, involvement of educational institutions in non-cash payment was chosen as one of the priorities. A. Guliyev said that the use of smart cards among students will help to grow up a new generation of modern payment culture and to create a digital payment environment in the country.

Then, the Central Bank's strategic partner, the regional director of the company “Mastercard “Suleyman Sozeri, who has extensive experience in digital payments made a speech with the presentation on single student cards. The company's official has shared student smart cards and international experience in neighboring countries in this direction.

Following the presentation, proposals were sounded and questions were answered. 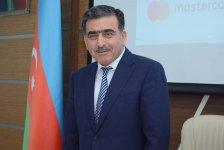