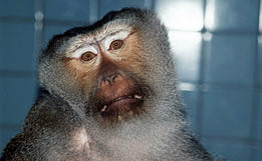 The organization People for the Ethical Treatment of Animals (PETA) called in Beijing on Saturday for a pending transport of 80 macaque monkeys to the United States to be halted, DPA reported

PETA appealed to China Southern Airlines not to carry the 80 monkeys contained in 32 cages to Alice in Texas, where they will be placed in quarantine before being despatched to laboratories for research.

PETA Vice President Kathy Guillermo said China Southern was effectively an accomplice in a bloody trade resulting in the abuse of the animals.