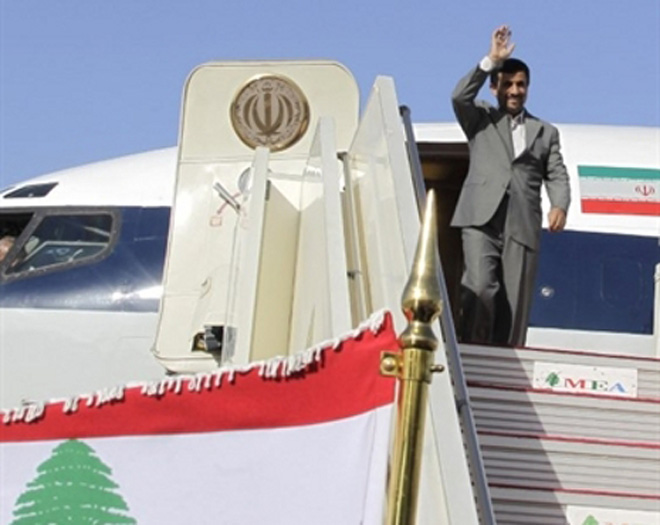 Iranian lawmakers have praised President Mahmoud Ahmadinejad's recent visit to Lebanon, saying it displays the might of the Islamic Republic, Press TV reported.

Deputy Head of the National Security and Foreign Policy Commission of the Iranian Parliament (Majlis) Hossein Ebrahimi said on Sunday that the visit made Western powers understand that despite sanctions and resolutions against Iran, the Islamic Republic is maintaining its dignity.

"The visit by President Ahmadinejad to Lebanon proved that Iran cannot be isolated," IRNA quoted Ebrahimi as saying.

He added that enemies have now known that Iran is a strong country which enjoys a significant position in the world.

"The visit brought disappointment among officials of the Zionist regime (Israel) and brought hope for the future among the Palestinian, Syrian and Lebanese nations," Ebrahimi went on to say.

Meanwhile, IRNA quoted another Iranian lawmaker Mohammad Hossein Nejad-Fallah who described as "successful" the recent visit by the Iranian chief executive to Lebanon.

According to Nejad-Fallah, the visit strengthened unity and integrity among Muslim nations.

Another Iranian lawmaker Jassem Saedi also told IRNA that the visit by President Ahmadinejad surprised many politicians in the world.

"In a country which is threatened by the occupying Israeli regime, the Iranian president had a brave presence and held a celebration of unity among different Lebanese groups," Saedi noted.

He further pointed out that the visit also strengthened mutual relations between the two Muslim states.

During his visit, which came at the invitation of his Lebanese counterpart Michel Sleiman, the Iranian chief executive met with the country's top officials, political leaders, academicians, and university students and addressed large crowds of people in Beirut and southern Lebanon.