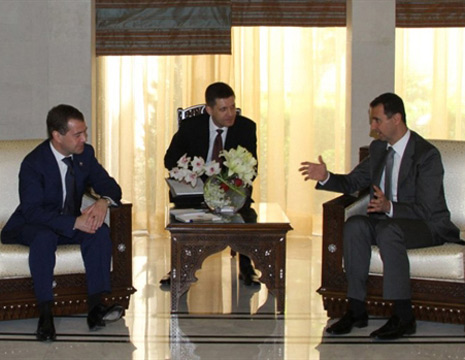 "There must be a nuclear-free zone in the Middle East, otherwise not only a regional but a global catastrophe will occur," the Russian president, who made his first official visit to Syria, said.

The statement approved by both presidents as a result of the talks said that "the current challenges to the international security related with the threat of proliferation of nuclear materials and their getting by non-state facilities must be resolved on the basis of the Treaty on the Non-Proliferation of Nuclear Weapons," Prime-Tass agency reported.


The parties call for the universalization of the Treaty, the need to join Israel as a non-nuclear state and putting its nuclear facilities under IAEA control. In this case, the document emphasizes that "the parties will coordinate their efforts and contribute to turn the Middle East into a zone free of weapons of mass destruction and their means of delivery.

The Russian news agency Prime-Tass says that the presidents of Russia and Syria called on Israel to join the Treaty on the Non-Proliferation of Nuclear Weapons as a non-nuclear state.