Society Materials 3 August 2013 14:36 (UTC +04:00)
A celebratory event entitled "The tenth anniversary of the revival" dedicated to the ten-year anniversary of the revival of the Albanian-Udi Church and the 1700th anniversary of the official adoption of Christianity in Caucasian Albania as state religion is held in the village of Nij in the Gabala region of Azerbaijan on Saturday. The event is organized by the State Committee for Work with Religious Organizations in cooperation with the Albanian-Udi Christian community of Azerbaijan. Speaking at the event held in the Jotari church of St. Yelisey in the village of Nij, chairman of the Albanian-Udi Christian community Robert Mobili said that 170 years ago, the Albanian church was transferred to the Armenian Gregorian Church, but the Udi refused to attend the Gregorian church to preserve their language, culture and loyalty to the Albanian church and began to pray at home. During the Soviet period, worships were halted under the state pressure. As Azerbaijan gained independence, the Udi were able to achieve certain level of revival in this direction, Mobili said.

When Azerbaijan gained independence, the Albanian-Udi Christian community was registered in the first place in 2003. Then, the work began on the restoration of churches and conduct of worship. As part of this work, one of the oldest churches in the Caucasus, the temple of Kish in Sheki region was restored in 2003, and one of the three Christian churches in the village of Nij - the Jotari church of St. Yelisey was restored in 2006.

"The historic home of the Udi is Azerbaijan. The Udi are one of the first ethnic groups to adopt Christianity in the Caucasus. Albanian king declared Christianity the official state religion in 313. After that, Christianity began to take shape in the territory of Azerbaijan. Historical justice triumphed after Azerbaijan gained independence, and the Albanian- Udi church was restored. Today, the Udi are considered successors of the rich religious and cultural heritage of the Apostolic Autocephalous Church of Albania. However, additional support is required for the church's further revival in Azerbaijan," Mobili said.
The community chairman said construction works are currently underway in the village of Nij densely populated by the Udi. Over the past 10 years, the President of Azerbaijan Ilham Aliyev has twice visited this village, which is a good illustration of the care and attention provided by the state.

Archbishop Alexander of Baku and Azerbaijan said in his speech that Azerbaijan is paying serious attention to the preservation of national cultural values.

"Multinational nature is our heritage. Azerbaijan pays special attention and care for the preservation of this diversity at the state level. Restoration of the Albanian-Udi church is greatly demonstrates this attention, since this temple is one of the carriers of this story," he said.

Photo exhibition titled "The tenth anniversary of the revival" was also organized in the framework of the event. In addition, a variety of publications on the history of the Albanian-Udi church were presented to the guests. The celebration continued with a cultural program. Iftar will be organized for the Muslim community in the evening in the yard of the Jotari church.

Note that, along with the Jotari church, there are also Gyoy and Bulun churches in the village of Nij. 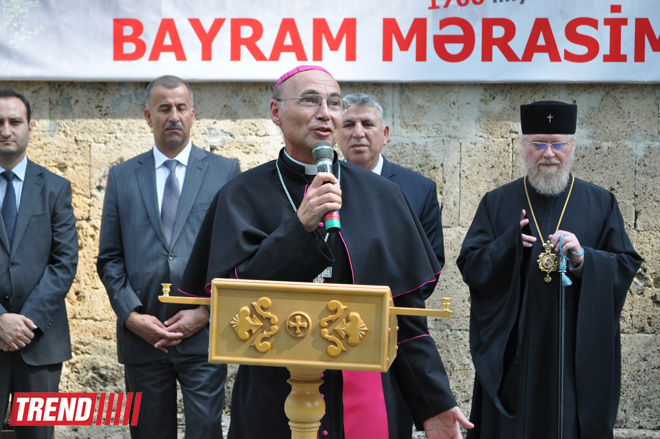 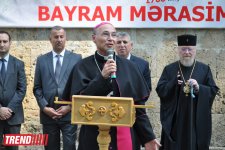