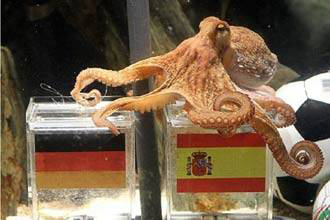 A German aquarium rejected a request from Spain's Madrid zoo to exchange the famous Paul the Octopus to any of its animals, BBC reported.

Oberhausen's Sea Life spokeswoman Tanja Munzig said that any other possible bid for the oracle octopus, who became a pop culture sensation by correctly predicting the outcome of many World Cup matches, would be rejected.

"We're very glad that Paul will stay here," she was quoted as saying, RIA Novosti reported.

Paul correctly predicted the results of all of Germany's matches in the 2010 Football world cup. Before retiring, he crowned his career by forecasting correctly that Spain would beat the Netherlands in the final.

The aquarium staff placed two clear boxes of mussels in Paul's tank before each game, one containing a Germany flag, the other containing the flag of the opponent. The octopus always chose to eat from the box of the winning team.

He, however, faced threats from many German fans after predicting the country's team would be ousted by Spain at the semi-finals. After their team lost 0-1, Germans began posting tasty octopus recipes on the internet.

A northwestern Spanish town of O Caraballino made the octopus its honorary citizen, and a summer festival in his honor is being planned in the country.