Azerbaijan's media must strive to meet the expectations of society, head of the socio-political department of the presidential administration Vugar Aliyev said at the international conference 'Media Environment in Azerbaijan: current situation and new challenges' in Baku today.

"Azerbaijan has already turned itself into a certain factor, the central country of the South Caucasus," he said. "Today our media must try to justify the expectations and challenges of our society with its freedom and pluralism."

He added that Azerbaijan is talking directly to journalists and listening to their proposals on a daily basis. So, Azerbaijan's main purpose is to form an independent, professional, free media that can convey Azerbaijan's voice to the world.

"Such urgent issues as organising free media, journalist safety, ethical initiatives and the development of journalists' trade unions are being discussed at the conference, "Aliyev said.

"Taking into account the best experience of Europe's developed countries, Azerbaijan demonstrated a willingness to meet the country's realities in this field," he said. "After gaining independence, Azerbaijan has set its development through a democratic way as its main goal."

He added that the legislation of the media activity in Azerbaijan is liberal enough and meets European standards. The fact that at present, there are many media outlets in Azerbaijan and journalists freely work in the country and abroad stipulates that these laws work in practice, Aliyev said. 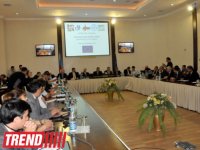 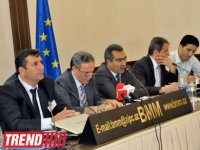