Society Materials 24 July 2012 12:33
The first group of 32 Azerbaijani sportsmen has left for the London 2012 Olympics today. Members of the Azerbaijani official delegation, head coaches and doctors accompany the sportsmen The first group of 32 Azerbaijani sportsmen has left for the London 2012 Olympics today. Members of the Azerbaijani official delegation, head coaches and doctors accompany the sportsmen.

The second group will leave for London on August 4, spokesperson for the Ministry of Youth and Sports Samaya Mammadova said.

She said that the Azerbaijani flag will be raised at the Olympic Games athletes village and the country will be greeted on July 25.

London 2012 Olympics will officially start on July 27. Azerbaijan's event will be held in London on July 28. Video clips dedicated to national cuisine will be demonstrated. Opera, jazz and mugham singers will perform during the event.

Olympic champion, judoka Elnur Mammadli will carry the flag of Azerbaijani team at the opening ceremony of the games. 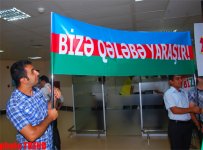