Azerbaijan 's First Lady's speech was added (the first version was posted at 16:51)

The World Forum on Intercultural Dialogue continued its agenda in the Gulustan palace of Baku with the next session focus "The role of women in intercultural dialogue" today.

The session chaired by Mrs.Aliyeva and Director of the UNESCO Division of Cultural Policies and Intercultural Dialogue Katerina Stenou discussed the definition of theoretical and practical framework to enhance women's role in public life as basic parties to the intercultural dialogue.

Mrs. Aliyeva made a speech at the event.

"First, I welcome all participants of the World Forum on Intercultural Dialogue. I say "Welcome to Azerbaijan!" to all guests, who arrived in our country to participate in the forum. I hope that this Forum will make a worthy contribution to the development of a real dialogue, and concrete work and measures will be carried out based on the Forum's outcome," Aliyeva said.

Aliyeva stressed that Baku has become a center of the intercultural dialogue in recent years. "Taking a tour to the past, we can list a number of international events. Baku hosted the World Summit of Religious Leaders in 2010. Baku was declared the capital of Islamic culture in 2009. It became a venue for a meeting of the culture ministers of the Organization of Islamic Conference (OIC) in 2009 and a meeting of the Culture Ministers of the Council of Europe in 2008. The country also hosted the International Women's Conference in 2008 with representatives from all continents. The conference adopted the Baku Declaration on the women' role in intercultural dialogue," Aliyeva said.

According to Mrs. Aliyeva, Azerbaijan has solid foundation and a favorable environment to organize such events. "From ancient times to the present day Azerbaijan is known as a country open to the world. One can be witness of a high tolerance dominating in our country from the first minutes of communication with our citizens. Muslim mosque, a Catholic church, Orthodox Church and Jewish synagogue that are located alongside in Baku is an evidence and result of this situation."

"Today, I am deeply grateful to all those who contributed to the organization of this forum. I express my gratitude to all international organizations supporting this forum, and I hope that the forum will be another step promoting the formation of healthy relations between peoples, nations and states," Mrs. Aliyeva said.

Mrs. Aliyeva believes today the intercultural and inter-civilization dialogue is one of the most urgent and popular topics in the world. "Different countries hold roundtable discussions, conferences and forums on this issue. Of course, any meeting of the kind should be welcomed and supported, at least for the fact that each meeting is itself a kind of dialogue. Although this topic is often included in the agenda, unfortunately, it has extremely small influence on the current situation. There is no need to conduct any research to confirm this idea. It is enough to watch any television channel or the Internet, and news of any news agency will confirm it," Mrs. Aliyeva said.

Hatred, intolerance, ethnic cleansing, genocide and war are the realities of today's world, she said. "Today, the number of confrontations and conflicts is not decreasing in the world but, unfortunately, growing. Of course, in this situation, the number of people - politicians, religious and community leaders, scientists and ordinary citizens joining the topic of the dialogue grows day by day. In turn, it includes various hypotheses, proposals and scripts into the agenda. For instance, a group of scientists is confident that the contradictions existing among civilizations will certainly lead to confrontation and conflict. The possibility of dialogue is already drying up and such multicultural society has no prospects," Mrs. Aliyeva stressed.

Others believe all countries should follow the Western model as an example to prevent confrontations, she said. "Undoubtedly, the idea of democracy and freedom, development and high living standards of the West worth approval and this is a progressive model existing in the world now. But we all well understand that the entire humanity cannot live like this. First of all, the resources in the world will not allow this and we also must not forget the geopolitical, historical and cultural factors," Mrs. Aliyeva said.

"The third view is that today all the successes of the West, including advances in science, technology and progress, is the result of long-lasting colonial policy ongoing throughout the history," Mrs Aliyeva said. "Indeed, it is impossible to agree with this approach; such thoughts lead us not to the future, but only to the past. In my opinion, all these approaches do not contribute to the establishment of a dialogue. Instead, they give grounds for new conflicts and struggles. Today, it is not secret that each such concept is backed by certain policies, certain political forces and certain political ambitions. I think this trend causes a very serious challenges and threats in the modern world. We live in a time, when we can see even those who want to play with the most sacred and the most pure feelings of people. Each of us belongs to different religions and the value systems of these religions are very similar. Confessing different religions, we pray to the single Almighty and the essence of our prayers is the same. But today we face an inconceivable fact far from humanity. Man, who calls himself a religious figure, burns the holy Koran. What is the name of this act? What is its purpose? Whose political order is it? To what and whom these people serve? But we did not see the world community to strongly condemn this monstrous fact. Brutality led to an even more monstrous cruelty due to its non-punishment and we have witnessed this," Mrs. Aliyeva said.

She believes one of the biggest threats of our time is the politicization of religion. "Extremist forces and slogans should not appear under the religious slogans. It is clear that such actions and events contrary to the dialogue and normal relations, and only gives ground to a new confrontation," Mrs.Aliyeva said.

"Dear friends, there are more questions than answers in today's debate. But one is abundantly clear that the intercultural dialogue has gone beyond the pure cultural problem and become a problem of great politics. The globalizing world is a reality today. Some welcomes it, and others regard it as a big trouble. But each of us feels this change in his/her life. Particularly, we feel it in terms of time and space, early or late, far and near. I believe each of us should be very well aware of that being a citizen of our country we are also members of one family named humanity. The process of globalization has turned us into the citizens of a large and common space. In this space, dialogues among people, nations and states should be based precisely on the basis of ethics and principles of justice," Mrs. Aliyeva said.

Laws dominating in today's world - both in politics and economy - are unfortunately, too far from justice and ethical standards," she said. "If today we offer a hypothesis of global ethics, then it might sound like a kind of utopia now. But let's remember that many of civilization's achievements are originated from the actions and ideas that once were regarded as a utopia. In due time when the women's movement, gender equality and movement for equality arose, many regarded it as a hopeless utopia. Today, however, successes achieved in this field prove the falsity of such an approach," she said.

"Dear friends, if today we are talking about a global ethic, it will again be a scientific hypothesis, and again we can see more questions than answers. But I'm sure that if we think about tomorrow and are fully aware of our responsibility to future generations, then we should try to build relations among peoples and nations on a platform of ethics and justice. It is a long and arduous process. However, any long road begins with the first step. I think we all should realize this step, albeit small, through our activities. Only solidarity and goodwill are required for this. I'm sure that we can build a constructive dialogue based on humanism and justice in this case," Aliyeva said.

In turn, Stenou stressed the importance of this session aimed at identifying theoretical and practical framework to enhance the role of women as key participants of the intercultural dialogue. In this sense, the intercultural dialogue is a sustained process based on universal values. This is an extremely hot topic, as co-existence under peaceful conditions requires understanding and moving away from the existing stereotypes and prejudices by all members of the public. Culture impacts attitudes to gender issues and activities in this direction. Culture plays a major role in search for a sustainable means for gender equality and equity.

Deputy Chairman of Russian Federal Assembly Federation Council Svetlana Orlova, Mayor of 7th district of Paris, Rachida Datin, and Director of the U.S. Center for Intercultural Dialogue Wendy Leeds-Hurwitz also addressed the event. They stressed that different political, social and cultural issues existing in the world have a lot of common points. Moreover, there exist differences in opinions and some difficulties.

Speakers urged to take a fair approach to the diversity of experiences and women's wishes, and use this diversity and expand the dialogue in an attempt to increase the intercultural dialogue. This requires deeper understanding of the essence of intercultural dialogue associated with women, study of its types and the obstacles it faces. This is especially important in education, science, research, media and culture. 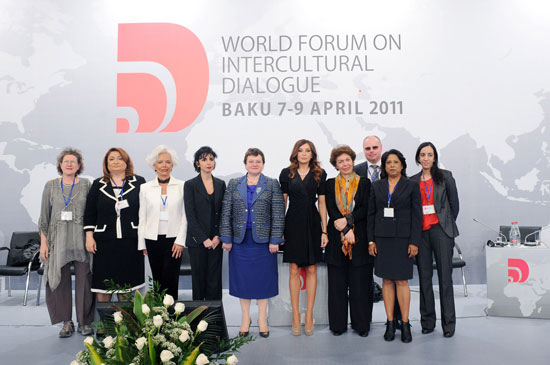