Prime Minister of Kazakhstan: Azerbaijan and Kazakhstan Have Always Been Friendly Powers 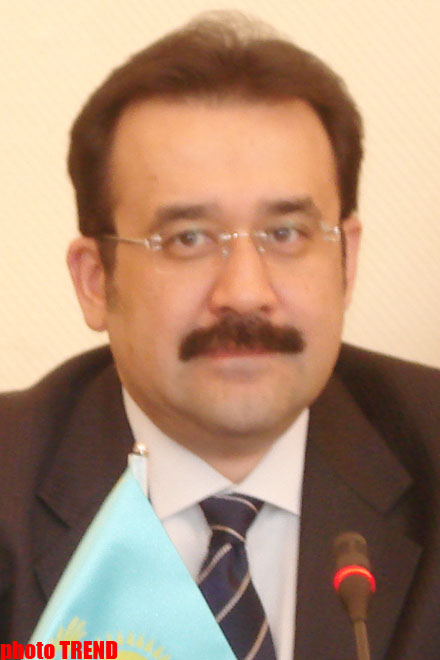 - How do you asses present bilateral relations between Azerbaijan and Kazakhstan? What are the prospects of Azerbaijani-Kazakh cooperation?

Bilateral cooperation is actively developing in the economic sphere as well. The Kazakh-Azerbaijani Inter-Governmental Commission for Economic Cooperation was established in October 1999. Thus, at present 36 small and medium sized enterprises tended by Azerbaijani business people have been registered in Kazakhstan and of them, 13 are joint ventures.

The priority in direction of cooperation is the participation of the two countries in the project of the international transport corridor Europe-Caucasus-Asia (TRACECA). The interaction is successfully developing under the working project group, Organization of Cooperation of Railways (OCR), Transport and crossing of the borders within UN Special Program for Economy of Central Asia and CIS Inter-Governmental Council of Railway People.

A grain terminal and a mill complex are being built in Baku to reduce the price of Kazakh grain and increase the volume of its delivery to the market of Azerbaijan. The key direction of Azerbaijani-Kazakh cooperation in the oil and gas field is the transportation of Kazakh oil to the world market via the trans-Caspian route.

Undoubtedly inter-parliamentary relations are expanding as well. An Azerbaijani delegation chaired by the head of the Azerbaijani-Kazakh Parliamentary Cooperation Group, F.Garibov, arrived in Astana in December 2006 at the invitation of the Kazakh side. During the visit, the sides exchanged views and experience regarding legislative activities, as well as discussing the strengthening of inter-parliamentary relations. In addition, progress is observed in cultural and humanitarian cooperation, in particular in the area of cinematography and the mutual participation in various creative competitions and festivals.

- What key issues will be discussed during the visit?

- My visit to Azerbaijan has been scheduled for 3-4 April. Diplomats of the two countries are working on a list of issues to be discussed. However, answering your question I can say that we will discuss the issues of expanding and strengthening bilateral commercial and economic relations with regards to cargo transportation, agriculture, tourism as well as inter-religious cooperation, etc.

Azerbaijan and Kazakhstan signed an inter-governmental agreement on Joint Oil Transportation via the Baku-Tbilisi-Ceyhan Pipeline. What does Kazakhstan expect from future development of cooperation with regards to exportation of its own oil to world markets via the territory of Azerbaijan?

- As you may remember, on 16 June 2006 the Presidents of Kazakhstan, N.A.Nazarbayev and Azerbaijan, I.Aliyev, signed an agreement between Kazakhstan and Azerbaijan on assistance and support of oil transportation from Kazakhstan to world markets via the Caspian Sea and territory of Azerbaijan through the Baku-Tbilisi-Ceyhan Pipeline. The key goal of the project is to create conditions for transporting the growing volumes of Kazakh oil to the Mediterranean Sea via the East-West energy corridor.

It is supposed that Azerbaijan and Kazakhstan will create new oil transportation infrastructures under the realization of the Trans-Caspian system on the coast of the Caspian Sea. Presently the Kazakh side is implementing works to agree the technological aspects of the project.

In my opinion, generally the realization of the project plays a key role in developing a unified energy corridor East-West.

- How do you assess the present level of the economic cooperation between Azerbaijan and Kazakhstan? What priority of direction of the oil sector can you highlight from the point of view of cooperation of the two countries?

- As I said, the economic cooperation between Kazakhstan and Azerbaijan is actively developing. Thus, according to statistics, the amount of trade turnover in 2005 totaled $150.4 mln, this figure equaled $297 mln in 2006, with $226 mln for export and $71 mln for import. In addition, a tendency of growth is being observed both in export and in import. The amount of trade turnover from January to March 2007 already equaled $41mln. Kazakhstan exports oil and hydrocarbons, natural chemical compounds, grain, barley, tobacco products and electrical equipments to Azerbaijan.

The volume of Kazakh export to Azerbaijan has increased by 175%. Moreover, significant changes of the commodity structures are observed due to the strengthening of commercial relations between the two countries. Thus, in 2006 the share of export of water transport means (vessels, boats and floating installations) increased by 33% compared with previous years.

In addition, the export of fuel, oil and oil products, machines and equipments has decreased compared to 2005. Moreover, a significant increase is observed over products from ferrous metal and land and water transport means.

- What is the position of Kazakhstan on Nagorno-Karabakh conflict settlement? Does Kazakhstan support the settlement of the conflict on the base of the territorial integrity of Azerbaijan?

- Kazakhstan supports and offers support to a peaceful settlement of regional and international conflicts, including Nagorno-Karabakh. We share the anxiety of the international community on this issue and condemn any kind of interference in internal affairs of the states, which brings escalation of tension and imposing threats for the territorial integrity, independence, security and stability of the sovereign states. As Head of the Government of Kazakhstan, I hope that the complicated situation will be settled peacefully.